König, a king among the automators

With efficient automation, competitive series production is also possible in Germany. König Automatisierungstechnik is currently proving this with an ingenious automation system for machining formed sheet metal parts. The heart of the automation solution is a three-axis system with linear axes from HIWIN, which makes a significant contribution to the high productivity and flexibility of the system.

A Cartesian three-axis system, a turntable, a stack magazine and a machining centre – these are the most important components of a new production cell from König Automatisierungstechnik GmbH. With only minimal conversion effort, the cell can be used for the series production of different parts and still achieve high throughput: The automation technology is designed so that the cell can operate with a minimum cycle time of 15 seconds. At this cycle speed, the processing machine does not slow down and high spindle running times can be achieved. In practice, the machining times per part are usually much higher, meaning that in these cases, the automation solution can even supply several machine tools with blanks at the same time or transport the finished parts away.

A Cartesian three-axis system at the core

The workpieces are fed and removed by a Cartesian three-axis system, which is made entirely of HIWIN components. This gantry retrieves the semi-finished products to be machined from an externally accessible stacking magazine secured by light grids and places them on a rotary table. In the following cycle, the rotary table transfers them to the loading system of the turning machine(s), which loads the turning machine and removes and returns the finished parts to the rotary table. Once there, the finished workpieces pass through several stations. First a cleaning station, followed by a measuring site in the next cycle. The data recorded there is not only used for gapless documentation, but also by the turning machine control system to correct trends. Statistical evaluation takes place separately for each interlinked turning machine. After measurement, the part can pass through another station, for example to apply a QR code. Finished parts identified as good are then taken from the rotary table by the gantry and placed in a washing basket or goods carrier in the palletiser. The goods carriers stacked on floor rollers are easily accessible for machine operators so they can remove full baskets and set up new empties in the shortest possible time. Bad parts are ejected via an ejection chute. They are then checked manually and the error patterns are analysed.

In operation around the clock

Six production cells based on this new concept are already installed in the production halls of König Automotive, a manufacturing service provider that produces serial parts for many well-known automotive suppliers on a subcontract basis and from which König Automatisierungstechnik emerged as an independently operating company in 2018. Components for a CVT gearbox of a well-known automotive supplier are currently being produced on the lines in four shifts. Thanks to the high degree of automation, one employee can operate three lines, each with two turning machines. "But we are still at the very beginning of the project. There is still potential for optimisation", says Tobias Hauser, Design Manager at König Automatisierungstechnik GmbH. "In other systems, we have used robots to make it possible for every machine operator to operate ten turning machines. This is our long-term goal here as well".
For handling of workpieces in the production cell, however, König Automatisierungstechnik decided against using a robot from the outset. For good reason, as Hauser explains: "A robot is heavy, takes up a lot of space, requires one robot expert per shift in case of problems and, last but not least, is expensive”.

At the beginning of the project, Hauser still had a classic Cartesian system in mind for handling the workpieces within the production cell. In such a system, linear guideways are mounted on a stable machine bed and the linear movement in the X and Y direction is generated with ballscrews. As part of the process of selecting suitable products, Hauser discussed the proposed design with the responsible HIWIN account manager. However, he ultimately advised against it for several reasons: With the required stroke of 800 mm, the critical bending speed would have been exceeded at the targeted cycle time. In addition, the solution would have required a relatively large number of components with correspondingly high assembly and alignment expenses, which is why the HIWIN expert suggested using the three-axis system. Its core consists of an HD (X) double axis and two HT-B (Y and Z) linear tables from HIWIN. "Since HIWIN offers components as well as ready-to-install axes and multi-axis systems, I knew from the very beginning that they would recommend the best solution for me", says Hauser.

"I took the recommendation and decided on the two-axis system from HIWIN. The technically sophisticated and rugged construction as well as the high-quality design simply won me over", says Hauser. "An important aspect is that the HIWIN system has a particularly maintenance-friendly design. For example, this means we can easily replace the toothed belt on our own when it wears out. Another plus is the cover strip, which is available as a standard option on HIWIN axes. The rugged stainless steel cover strip reliably protects the inside of the axis from chips and cooling lubricant, which significantly increases the service life.  In addition, unlike with a robot, which usually requires special know-how, shift supervisors are also able to perform axis referencing on their own if required, which in turn increases the availability of the system.

Short delivery times – but of course!

HIWIN has also considered the constructor: With an online configurator, the gantry can be set up in minutes. At the end of the process, CAD data can be retrieved. HIWIN also stands for fast delivery after the order is placed: It only takes about two weeks. "Even in the boom year of 2018, the promised deadlines were kept, even while we had to wait for up to 40 weeks for delivery from other suppliers", emphasises Hauser.
The drive specialist achieves short delivery times because core elements, such as guides, are produced in-house. The company also has its own production capacities for turned and milled parts such as housings and flanges. The short delivery times are also helped by the fact that HIWIN stocks supplier parts with long replenishment times. The purchase of spare parts is also quick and easy: Wear parts, such as toothed belts, can be easily re-ordered using the serial number of the axes.
In the case of König Automatisierungstechnik, the three-axis system consists of a size 3 HD double axis with two axes driven in parallel (profile cross section: 80 mm, stroke: 400 mm) as a base and is combined with one HT-B linear table each with belt drive (profile width: 150 mm, stroke: 800 mm) in the Y and Z direction. "I also like the fact that we can get complete packages from HIWIN, such as the gantry, but also individual parts that we assemble ourselves", says Hauser. Among other things, König Automatisierungstechnik ordered the drive components for the palletiser from HIWIN and set up the drive system itself.

The result has impressed Hauser and the customers of König Automatisierungstechnik: "Also thanks to the Cartesian three-axis system, with this machine we have succeeded in combining minimum cycle times with a high degree of flexibility and availability, enabling us to map production processes very efficiently. Due to the high adaptability of the basic machine, we were able to create a highly automated solution for competitive series production in Germany for our customers in the shortest possible time. Our customers’ interest in the new automation solution is very high". 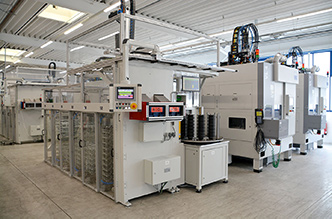 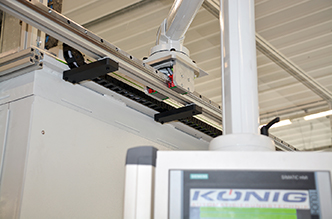 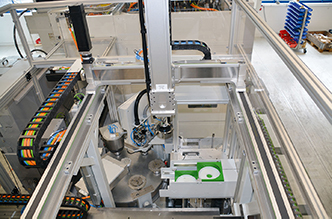 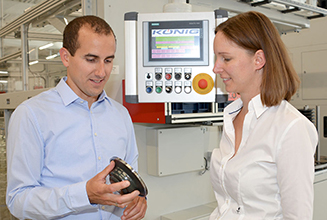